As soon as you are able to play the :"Fifteen Basic Chords", it will become obvious that some sound better together than others.  In any key there are three chords which appear in virtually every basic progression.  They will always sound good together, whatever order you put them in.  they are called the primary chords and they represent the building blocks of all musical composition.

You can find these three chords in any key by looking at the major scale.  Take the key of C as an example.  The Key of C has no sharps or flats so the notes are C D E F G A B C.
The note C is called the root note and the chord built on the root is C major or the tonic chord.  The other 2 primary chords are the 4th and the 5th.  Counting up the scale that would be F and G. (note that the root is always counted as 1) These notes are also called the sub-dominant and dominant respectively.  In any key these chords have the same relationship to each other and together compromise the "Three Chord Theory".

The Roman Numeral System is used in music theory to identify each note in a given key by a roman Numeral.  The first chord, the one built on the root note is I.  the second chord of the scale is II the third chord is III the fourth is IV and so on up to VIII which is the octave.
Each chord also has a name according to its position in the scale starting with the tonic(root), supertonic, Mediante, sub-dominant, Dominant, sub-mediante or relative minor, Seventh or leading tone and the tonic or Octave.
The best way of taking in this information and understanding "Three Chord theory" is to familiarize yourself with the sounds behind the rules.  And the only way to do that is to play the chords one after another in various combinations and listen to the effects they create.

The chart below sets out many of the most common I-IV-V chord progressions using the "Fifteen Basic Chords".  The I and IV chords in this chart can be major or minor but the V chord or dominant is always major and is usually played as a seventh chord.
​ 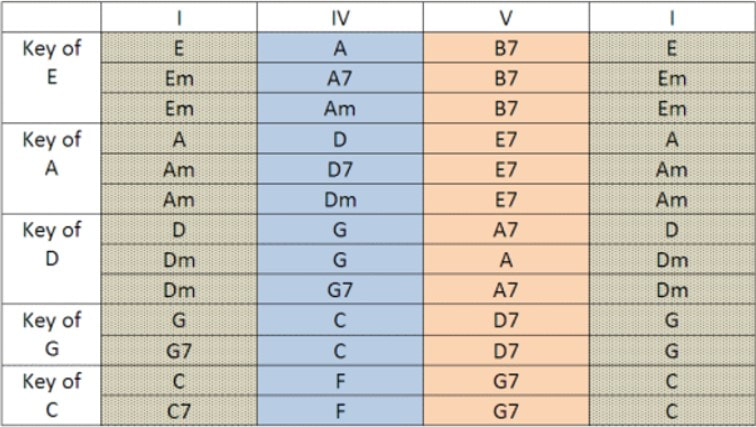 ​Blues Chord Progressions: The Blues is a musical form that is based almost entirely on three chord theory.  Although the blues was certainly not analyzed by its creators, its formula has survived to become the structure of Pop, the accepted roots of Jazz and the heart of Rock.
The most common blues pattern is known as Twelve Bar Blues.  It gets its name from the fact that it takes "bars" to complete each cycle of the chord progressions.  A "bar" is equal to a "measure" in music theory or a count of 1-2-3-4 in common time.  The blues is difficult to categorize however.  there are many variations on the theme and many ways of arranging the three chords. Sometimes the chords are major, sometimes sevenths, sometime there are only eight bars.  The blues is characterized as much by its rhythms and its vocal and lead guitar solos as it is by its chord progressions.
​
Below are four typical blues chord progressions in the key of E.

The first represents what is usually considered to be the basic twelve bar pattern.  the second shows the same progression with sevenths, the third is a typical variation and the last one is an eight bar progression rather than twelve.

In the section on 3 Chord Theory we showed how to find the I, IV and V chords built on the 1st, 4th and 5th notes of a harmonized major scale.  We now introduce chords built on the 2nd, 3rd and 6th notes of the scale.  These are called secondary chords and Roman Numerals are used in the same way to identify which note of the scale each chord is based.
The VI chord is based on the 6th note of the major scale in any key and is called the relative minor.  Its natural form is as a minor chord but it can also be played as a major or seventh.
The II chord is the 2nd note of the scale and is called the supertonic.  It also is usually played as a minor but can also be a major or seventh chord.

The III chord is based on the 3rd note of the scale and is called the mediant. It is called this because it is half way between the tonic I and the dominant V.  It is usually a minor but can also be played as a major.

We will use C as an example again because it has no sharps or flats.  As you can see from the chart below the II chord is a D, the III chord is an E and the VI chord is an A.  These chords can be worked out in other keys using the same method.

Below are some common chord progressions using the six scale chords we now have.  The progressions shown below represent most of the variations used in simple popular songs.  NOTE:  The last two progressions key of G do use a B minor chord.  ​

​For anyone who didn't get the whole I IV V theory bit, here comes a more detailed explanation. Here is a D major scale:

These are all the notes in the key of D. These are also the roots of all the chords in this key. So if we make all these notes into chords (triad chords), it will look like this:

Now try to practice playing the 1st 4th and 5th chords (I IV V) in different keys. For the more "unusual" guitar keys, you will need to play more barre chords. Once you've learned barre chords though, it's very easy to change the key.