How to Read Guitar Notes
​

To learn how to read guitar notes is not as difficult as you think. In standard notation, music is written on a Staff. The staff consists of 5 lines, (the lines do not represent the guitar strings in any way). The notes can be written on the lines or between the lines in the spaces. The higher the note is placed on the staff, the higher the note (pitch). When the notes are written higher or lower than the staff, extra lines are added as you can see on the image further down. Small lines above or below the staff are called ledger lines.

Music can be written in different clefs. Guitar music is written in G clef (treble clef). It is called the G clef because the clef circles round the G note. 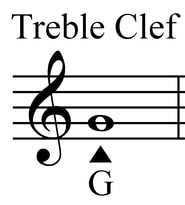 Let's focus on the note height first and wait with the rhythm. Here is a standard notation staff and a tab staff. On the tab staff you can see where the notes can be played on the guitar. The difficulty with reading notes on guitar is that the same note can be played on different places of the neck. Tab has 6 lines which represent the 6 strings on a guitar. See more in the How to Read Tab lesson.

Use this diagram and sayings to help memorize the position of the notes on the staff. 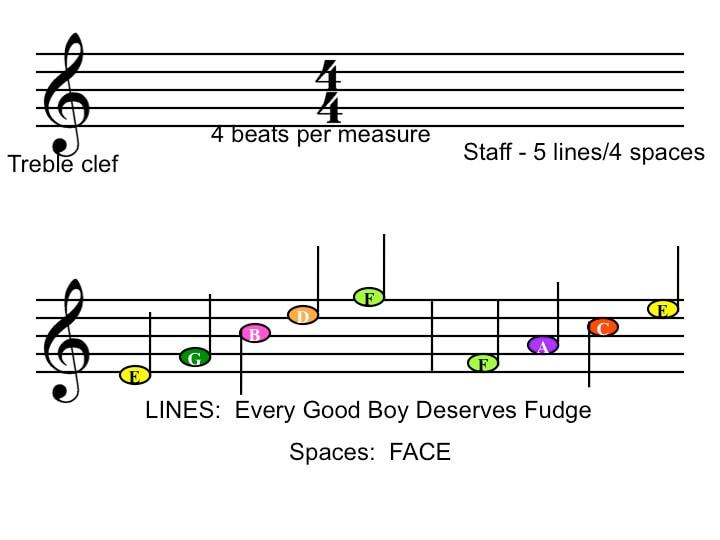 ​The first thing I teach is to learn the notes on the first 4 or 5 frets of the guitar, start with one string at a time, (Notes on the Strings).
Sharps and flats - # and b
So far we've gone through the natural notes, but these notes can also be raised or lowered.
A sharp (#) raises a natural note by a half step.
A flat (b) lowers the natural note by a half step.
A  "resets" the note (F# goes back to F, Bb goes back to B and so on).
Here is an example of notes being raised lowered and reset:

Keys and key signatures
A key tells you what the harmonic center of the song is. The baseline of all major keys in music is C. This key has no sharps or flats in it. All other keys do. For example the key of G has one # and key of D has two #. The key of F has one b, the key of Bb has two b.

So when your reading notes in the key of G and an F note comes up, it is automatically raised to a F#.
Here are all the major key signatures:

A Rest means that you should be silent for as long as the rest lasts. The rest to the right of the note in the table above has the exact same value as the note to the left of it. So that rest lasts just as long as the note.
​
​Here is an example in 4/4. In 4/4 one measure has place for 4 quarter notes = 1 whole note. Let's fill one measure with a whole note, the next one with half notes and so on, to see how many of each note we can fit in the measures:

and the same thing with rests:

I hope this makes it a little bit clearer. Finally we will look at some more important symbols.
More symbols
A Triplet is three notes in the place of two. They are called half note triplets, quarter note triplets and so on.
​

A Dotted note is lengthened by half its value. In this example a dotted quarter note will be 1 and 1/2 quarter notes long.
​

Repeat marks indicate that the section in between them shall be repeated one time.
​

Now you've learned all you need to know to start reading easy guitar notes! You should really try to practice reading notes on one string at a time. Start with Notes On The Strings this section will start with 2 or 3 notes per string, along with some easy exercises to get you started.   Good luck!
How to Read Guitar TAB